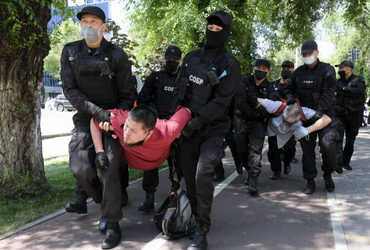 The agitation in Kazakhstan on the issue of hike in petrol and diesel and gas prices is becoming increasingly violent. 150 people have died in the violence. The government has arrested 2,000 people on charges of violence. 50 security personnel have also been killed in the violence. Russia has deployed 200 soldiers to control the violence.
Protests turn violent in Kazakhstan. The violence did not stop even after the resignation of the entire ministry, including the Prime Minister, in response to the demands of the protesters. President Tokyo has controversially ordered the killing of violent protesters. Another 150 protesters have been killed.
Russia has deployed peacekeepers to the neighboring country at the request of President Tokyo. Russian troops are stationed in Kazakhstan. About 200,000 to 5,000 Russian soldiers are trying to stop the violence. It also tries to maintain law and order in Kazakhstan. The police have also died in the face-to-face fight.
Kazakhstan’s interior ministry said in a statement that there was a “possibility” that foreign organizations were involved in the violence. Those who are protesting are not protesters but terrorists. Which incites violence in the country at the behest of foreign powers. Earlier, President Tokyo also called the protesters “terrorists” and ordered them to be shot.
The Indian Ministry of External Affairs said in a statement that there is bilateral cooperation between Kazakhstan and India. That is why the Government of India has talked to the Government of Kazakhstan regarding Indians. The Ministry of External Affairs said, “India has a special eye on the changed situation in Kazakhstan.” Condolences to the families of all those killed. India and Kazakhstan enjoy cordial diplomatic relations. The government is committed to the safety of Indian citizens. It is imperative that all Indian citizens stay in touch with the embassy.
The United Nations has also expressed concern over the situation in Kazakhstan. Several countries have suggested that Kazakhstan’s interim government should find a middle ground rather than break up.