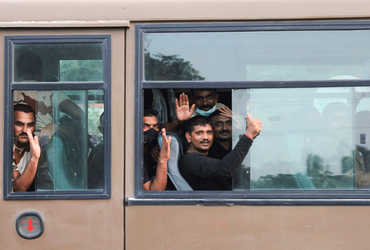 Kabul: There were reports of 150 Indians being taken away by Taliban from Kabul airport in Afghanistan. Now the news has come that the Taliban have released all the Indians. According to sources, all are safe and passersby checked their passports and dropped them.

Earlier, the Taliban had claimed that all Indians had been taken inside the airport. The Taliban denied the kidnapping, claiming everyone’s safety. Taliban spokesman Ahmadullah Wasik called the news baseless and said the Taliban could not take such a step.

According to sources in the local Afghan newspaper, all the Indians are safe and have been released after checking their passports. According to the newspaper, the Taliban had shifted more than 150 people to Alokozai. Most of them were Indian citizens. Some of them were Afghan citizens and included Afghan Sikhs. Alokozai Company is located near Hamid Karzai International Airport. Everyone left for Kabul airport except the Taliban.

It is noteworthy that after the Taliban occupation of Afghanistan, the Indian government has started evacuating its citizens. However, many Indians are still stuck in Afghanistan.