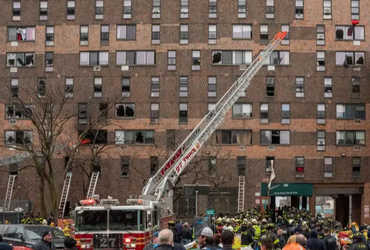 A fire broke out in a 12-story building in New York due to a faulty heater. A total of 18 people, including 3 children, have died in this. Four people with serious burns have been admitted to the hospital. 200 fire brigade is dousing the fire.
A huge fire broke out in New York. The first fire occurred on the third floor of the building due to a fault in the electric heater. Then the whole building caught fire. A total of 14 people including three children died in this fire. 3 people got serious burns. The condition of many of them remains critical. For the first time in 40 years, there has been such a horrific fire in New York. The fire alarm went off, but at first it was not taken seriously. This spread the fire.
A team of 200 firefighters was engaged to douse the fire. Mayor Eric Adams said the tragedy was unimaginable and the city was saddened by it. There has not been such a major fire incident in the city today. We have come to see such a dangerous tragedy.
According to the mayor, the 12-story building was mostly inhabited by African-American families. He said that 4 out of 6 injured people are fighting for their lives.
The governor of New York state mourned the aftermath of the fire. The Governor also announced financial assistance to the families of the victims.
The building where the fire broke out is 40 years old. There are 120 units in this residential apartment. However, no construction or license violations were reported. The commissioner of the fire department said that despite adequate fire safety efforts, the fire could not be brought under control.
Many people died of suffocation after the house caught fire. Many of them jumped out of the window to save their lives. Many such people were also injured. Apart from the 12 dead, a total of 8 people were affected by the tragedy. These range from burns to injuries caused by jumping from up to down.