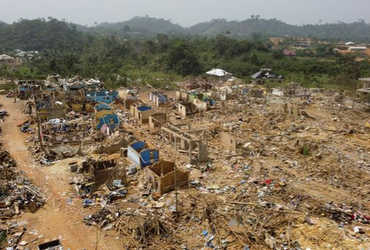 A truck laden with explosives has crashed in the African country of Ghana, killing at least 12 people and injuring six others. Also 200 nearby houses have been damaged. The truck hit the bike.
In the African country of Ghana, a truck full of explosives collided with a bike, causing a major accident. 12 people died on the spot. Three people injured were taken to the hospital. In the village where the accident took place, around 200 houses were damaged in the nearby village.
Ghana police say a truck laden with explosives used in the gold mine collided head-on with a speeding motorcycle. The truck had to cover a distance of 150 km when the accident took place.
People have been evacuated from nearby villages. Police said a state of emergency has been declared in western Ghana. The accident happened between the western cities of Bogos and Bawdi. The mine to which the truck was sent is said to be operated by the Canadian Kinross company. The government said several animals were also killed in the explosion that followed the accident.