12 feet of water has been flooded by heavy rain in central China, killing 21 people 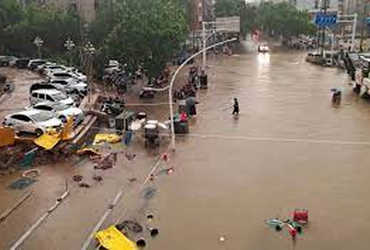 In view of the possibility of flood, the administration has been ordered to remain alert.

BEIJING: 21 people have been killed and four others have gone missing after heavy rains lashed a city in central China’s Hubei province, officials said. Local sources gave this information in a statement. According to officials, the city of Lulin in Suijian County received 503 mm of rain from Wednesday to Thursday. Due to which 12 feet of water was filled.

Heavy rains have affected 8,000 people in the city. Relief work is going on. China’s National Meteorological Agency has issued a warning of heavy rain in some central and eastern parts of the country.

The Meteorological Department has given instructions to take precautionary measures in these areas. Heavy rain is still forecast in Hubei, Anhui, Hunan, Jiangxi and Zhejiang. There is also a possibility of 200 mm of rain in some areas.

These five provinces are expected to receive 80 mm of rain in an hour. The National Meteorological Department has asked the local administration to remain alert in view of the possibility of floods. China has a four-color weather warning system.