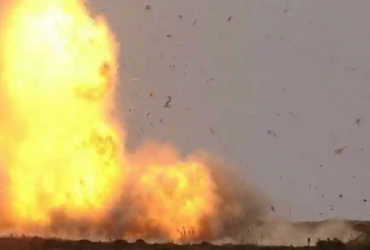 The bomber was killed in front of Kabul airport in Afghanistan shortly after noon. A devastating explosion at a military arsenal in the far south of Kazakhstan has killed at least eight people and injured more than 50 others. According to the Ministry of Defense, 10 explosions occurred in the military arsenal. Defense Minister Nurlan Yermakbayev offered to resign after the incident.

According to the Defense Ministry, the bomber struck in front of a military base in the southern province of Jambil shortly after noon. The explosion was so severe that it became a scene of flames. The fire soon spread to a nearby godown, where several essential items were kept.

The ministry initially said there had been three explosions. But other reports put the death toll at more than 10. A video of the blasts has also surfaced. The fire is seen spreading like a storm in the video. According to preliminary information, a total of nine people, including four soldiers, were killed in the blast. The army and relief workers were damaged by the blasts.

After the explosion, local authorities evacuated people living around the military base. As a result, an estimated 1,000 people had to leave their homes temporarily. Apart from this, the railway line was also closed. The cause of the explosion was not immediately known. However, Defense Minister Nurlan Yermakbayev has offered to resign.